I remember planning the night before planning to not take a shower the next day until I got to my friend Dani’s place, because I would be walking out in the hot sun with my luggage again. Even though it would only be for about 15-20 minutes, that much time dragging luggage around in the sun can make all the difference. I had taken one the evening before I left St. Petersburg and I try to only take one every other day because it is supposed to be better for your skin and hair, but this usually ends up being every day and a half or even every day because I hate being dirty. Unfortunately this morning I just felt so dirty that I had to take a shower. I got up early because I was still on St. Petersburg time and used to waking up at 7:30 am for class, and the first thing I did was shower (without a towel).

Throughout my travels this last year I have often not had a towel to use, or only a very small one. When I traveled in Russia, I used a hand towel, which was actually a sufficient size to serve the purpose of drying myself off. When I traveled over winter with Kenzy and Ali, Kenzy and I both did not use towels because we didn’t have them to bring with us. Drip drying was good enough. This time I still didn’t have a towel to use, but I needed a shower (I think the lack of towel was another reason I had intended to wait until I got to Dani’s to shower, because I assumed she had some that I might be able to use).

Dream Cube Hostel thankfully has breakfast included since I didn’t have any groceries. The breakfast was the typical European hostel breakfast. There was coffee, tea, and milk of course, some fruit, cornflakes, bread that you could make toast with and jams to put on the toast. I decided to take a couple of pears and an apple and cut them up to put on my cereal. This was the breakfast that we had had almost every morning while we traveled in the winter, with slight variations here and there, and this was the best I could come up with, with what I had to work with.

(The park we visited)

After I had finished eating breakfast, I let Dani know that I was ready to come over whenever she was. She wanted to take some time to clean up after our other friend left, so I got back to work booking flights and hostels and communicating with my friend in France to see if I could come visit. As has been my intention throughout this trip, I tried to study some Russian, but everyone wants to know what you are doing so it is very difficult in the hostel environment.

(The pond at the park)

Eventually Dani was ready for me so I headed in her direction. The street between us was on a hill, and thankfully I was headed downhill rather than up.

I found what I thought was her building, and realized that we hadn’t talked about a way for me to contact her when I got there. I managed to get in the building and stood around for a while looking at the mailboxes or for some clue as to where in the building she stayed. Eventually I decided it might be better to exit the building because anyone who came in kind of gave me a strange look since I was standing there with my luggage looking lost in a building that you had to have a key or have someone buzz you in to enter.

I stood back out on the street looking at the buttons that would call each apartment (because sometimes they have names next to them), and then Dani came out probably not even five minutes later to throw some clothes away. (She was leaving Barcelona soon at this point and had to decrease the amount of possessions she owned abroad because she could not carry it all home).

After we made it inside, we started off the day (it was probably 1 or 2pm at this point so “starting” might not be the proper word) in a very relaxed manor. Dani took a nap because she was tired from having our other friend over, and talked to my friend with whom I planned to visit Istanbul until it came time for me to attend my online orientation for my summer program.

(The arch up close)

Eventually Dani got up and decided to show me a little bit of the city. We went to a beautiful park with a pond, and spent some time walking through it and just enjoying the greenery, and catching up of course.

(A little background on us. Dani and I met at my university in Pennsylvania. She was a junior (3rd year) when I was a freshman (1st year). We met on the cheer team. We both cheered that year and were both treated badly by the captains. She was also in the sorority I joined my sophomore (2nd) year, and she was a major part in me joining. Not because she tried to convince me to join or not join, she (and most of the rest of my sorority) was just the type of person I would want to call my sister. Through mutual experiences, and just having enough in common we became good friends and close sisters). 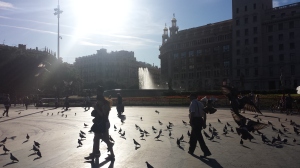 (All of the pigeons)

After walking through the park, she showed me that Barcelona had an arch of triumph, like France (not that I have seen the one in France because I have not been there yet).

Before heading back in the direction of home, we decided to look at an optometry store to see if they had the contact solution that I needed. I had not worn my contacts for the last 2 months while I studied because I ran out of the cleaner and could not figure out how to get it in Russia. We asked a lady and thought she understood what I wanted. The bottle I was sold was weird, but I needed to wear my contacts so I thought I would give it a try.

Dani had spent all of her money while our other friend was with her, so she did not have much to spend with me. On that first night she showed me a small restaurant that she said was very local, and the plan was for me to eat there and her to eat back at her apartment since I wanted to try something local. 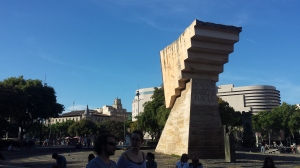 At first I sat outside because the weather was nice, but the waiter immediately asked me what I wanted, and when I asked for a menu, he said they didn’t have any and beckoned me inside. He sat me at a table and handed me a menu in English and one in Spanish. I was supposed to find what I wanted in English then find it on the menu in Spanish because the man did not speak a word of English. Unfortunately the menus were slightly different. I wanted some sort of sausage with mushroom sauce, and instead ended up with sausages with fries. At least the fries were real, and the meal was only about 6 euros, which is very inexpensive for a bigger city like Barcelona.

That night, after I returned, we broke out the vodka. Dani apologetically mentioned that she did not have shot glasses, but funnily and fittingly enough (because I had been in Russia), I did. We definitely did not finish the bottle that night. We only got about a third of the way through it, and then we decided to head to a bar. The bar we were planning to go to was called the Dow-Jones Bar or something. The idea was that the price of drinks would go up if someone bought one, but if one had not been sold in a while then the price would start dropping. I thought it was a really cool idea, so I wanted to see it.

The night did not really go as planned and we left the bar almost as soon as we arrived and returned home to watch a movie or something. I want to ask my friend before I put additional information about the night and Barcelona in general in my blog.